On the Bank Holiday of 27th May the annual gathering at Staplefield took place. 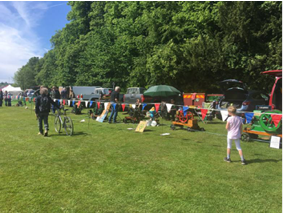 I had put in the newsletter that if people could let Ian know if they were attending to exhibit. The reason behind this was the rally field is not that big and mainly taken up with cars. SEAMS is allocated a little strip to exhibit on, so some regulation was required in the form of size of entry and numbers.

The unfortunate thing is we had a couple of people that said they would be attending but did not turn up. This gave us two issues, as we have allocated slots it made it difficult to accommodate people that just did turn up on the day and secondly we then had a gap where people that said they were coming but did not. This was due to the timing of people arriving as you try to keep their slot but how long do you do this for! A very good day and lots of visitors.

We have a large number of shows listed for you under events, together with all of the latest news straight from the rally field.

You can find all sorts of items for `Sale' and `Wanted' under `About us', together with a range of services being offered to make sure that your engine is in perfect running order for the summer ahead.

As always, we would love to receive your feedback and if you would like to share your stories and ideas, please email us at seamsclub@hotmail.co.uk.

We look forward to hearing from you soon.